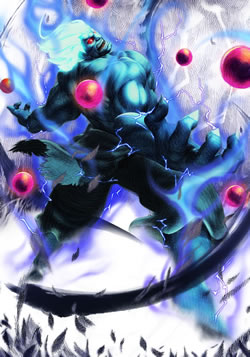 In a similar way to how SnH Ryu or Satsui Ryu represents Ryu in the lowest of spiritual pits, Kuruoshiki Oni does this for Gouki. Referencing back to Gouken’s SF4 win quote to Gouki that he’s neither compromising with humanity nor becoming an oni, Gouki achieves the latter with his AE opening and blowing apart a tree after much groaning and growling (contrast with Gouki’s opening, same forest scenario, blows apart and uproots a whole area of ground and vegetation, with slient lips and his aura).

Oni is described as a being with bare fragments of Gouki’s consciousness refusing to stop clinging, while the rest of its mindset is nearly completely taken over by the onigami or fierce god that manifested itself as the kanji “ten” on Gouki’s back. He attained this state of being through over-exposure to or being bleached by SnH, which never occurs more readily than when he executes a shungokusatsu, only this time he fails to regain himself in his own flesh, blood, and spirit after the technique.

Oni repeatedly refers to himself as a kishin, which is another reading for onigami/fierce god. His body resembles Gouki’s (at least from the waist up) due to the lingering portions that Gouki’s will remains intact, while otherwise the rest of him is molded through the onigami’s reckless whims. Oni barely cares to clash fists and fight as Gouki did (he rips off the beads Gouki normally wears around his neck and has them hover around him boastfully as trivial trinkets), and exists for no other purpose except to consume and devour anything and anyone, and yet never reaching a satisfactory level with any amount of either one, constantly hungry and craving for more of them.

Although Gouki is almost thoroughly swallowed into the onigami with Oni’s existence, his will nevertheless successfully impedes both wills from granting Oni’s maximum potential strength-wise as a deity. The clashing of mindsets resulting in the being’s schizophrenia as well as a mis-allocation of power and might, Oni delivers with quite a measure of instability despite his imposing first impression. In his AE ending he expends a ridiculous amount of energy and effort to make an already due-to-erupt volcano spew its lava while only managing to make it create only moderate cracks and fissures around its gushing cone. Again compare and contrast to Gouki back in SFZ2 with Ryu’s ending: with a bare fraction of Oni’s momentum Gouki’s fist makes the volcano of Gokuentou not only erupt but completely wipe out the entire island, volcano and all, gone in fleeting moments. Even Gouki is appalled that Oni, whom he even labels as an ashura or a fighting demon, would destroy Gouki’s long-time forged fist so utterly in Gouki’s win quote to Oni. 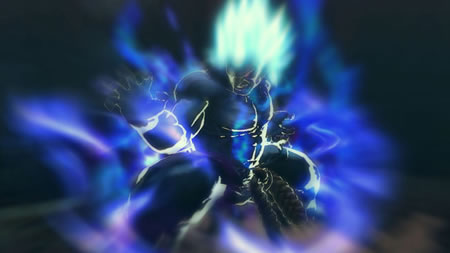