Native place: Fought in (and probably born in) Japan.

Final Fight 2: Retu leads the new Mad Gear in its attempt to make a
comeback. He holds Genryusai and Rena captive, before Haggar and co fought
him and knocked him out the window.

Where he is now: Probably dead, like Belger. Those windows are deadly
things, after all.

He’s stated to be responsible for reviving the Mad Gear. Doesn’t seem
to me like he actually “revived” heresay given all the FF2 Mad Gear members
are completely new with the exception of Andore and Rolento.

I wonder if Sodom was the one who recruited Retu or something. The
crazy Japanese Kabuki fighter seems like just the type that Sodom would
like. I don’t even know whether Sodom was the true leader of Mad Gear or
whether Retu was during the FF2/SFZ2 time period… I’d actually go with
Sodom though since Capcom doesn’t seem to give a damn about the majority of
their FF2 characters, and judging by Sodom’s SFZ2 dialogue with Rolento.

In-game storyline-wise, Rolento is suspected to be the boss of Mad Gear
in FF2 until he reveals that Retu actually is.

Retu is also pronounced “Retsu”, but his name was romanized as “Retu”.
He’s not SF1 Retsu though, unless he decided to take up Kabuki and get a
spin kick and put on 130 kilograms of weight before joining an evil gang.
Admittingly, a kabuki wig would do a good job of covering his bald head. 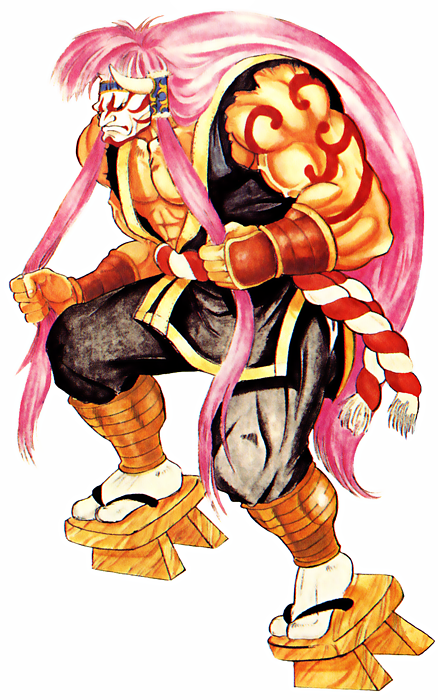