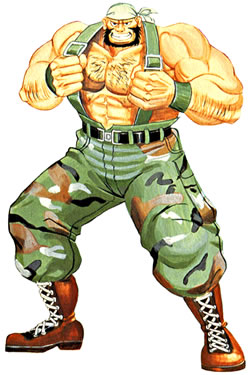 Final Fight 2: While Freddie was in the Navy Seals, he punched out one of
his superiors. This lead to his discharge by the Navy. Now as a freelance
mercenary, Freddie was hired by the Mad Gear gang to head their terrorism
unit.

Where he is now: *shrug*

He joined the Mad Gear after being discharged from the U.S. Marine
Corps for fighting.

Although it may be just an Easter egg appearance, Guile is apparently in
the background when you fight Freddie. …cheering him on apparently, too.
Maybe he doesn’t realize that Freddie’s been booted from the force (ditto
for the rest of the troops there).